Something big is about to happen in a month's time

Ignore the tile. It's another post of another day ;-). The one year since I last posted were filled with many changes in my life both work and personal. Personal wise, Zelda turned 3 years old recently. Still trying to be a good father though ... not sure if I am doing things right but we'll hear soon enough from the little Hyrulian princess.

Pimped my Mr. Robot wannabe MacBook Air (it's an 11-inch model by the way and is something that I am typing on currently). Filled with stickers, nothing too personal save perhaps the dated picture of the Hyrulian princess. The priciest sticker would have to be the Hak5 one. How did I get it? 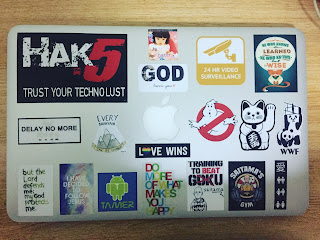 Well I side ordered a few of them when I spent some dough on the Hak5 wireless kit which is shown below. Almost everything you see in the picture (rubber ducky USB, LAN turtle, tons of cables, a DVB tuner, antennas and of course the famous PineApple device) are all from Hak5 except the HackRF One, which is a device I had a year back. That's really some kick-ass security gear there! Now I need to scout for RFID cards and some other security hardware to add into this wireless kit. By the way, if you ever buy these kind of stuff, make sure you know what you are doing and not try something stupid and illegal. You do not want to land in jail for nothing ... 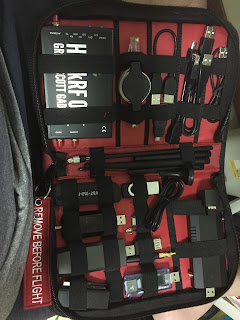 On the other hand, if you want to feel like doing something 'illegal' but legally of course, there's the Mr. Robot game that's available on iOS and Android now. It's a text-based SMS-like game which puts you in the role of a hacker wannabe (either by choice or forcefully depending on how you look at it) who is going to help Darlene and 'E' to achieve their goals. And yes, that's what I been spending some of my train rides time for. 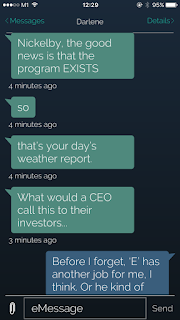 Exam-wise and also to improve myself, I am attempting to try for the OSCP the next few months. Hopefully I am good enough to attempt it but we'll see. It's a tough exam. Much much tougher than the CISSP or even CEH I would say (not that I have taken the CEH before ;-)). Wish me luck!